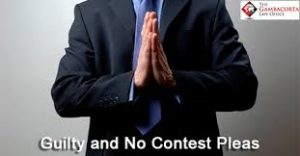 Entering a plea or no contest can result in a very unpleasant circumstance especially if you are considered removable or deportable from the United States.

Any foreigner who has been detained by U.S. authorities must bear in mind the consequences of pleading guilty or no contest. This may be applicable even if you are the recipient of a U.S. green card.

Consider getting proper advice before deciding to plead no contest or accept plea bargain. While criminal defense attorneys may advise to go by this game plan simply to prevent you from going to trial or serving prison time; such a decision, may not be in your best interest.

It is very important that you find out whether the decision on which conviction you settle for will not result in removal proceedings. Your final choice can be used against you in a future immigration court hearing.

If you entered a plea and were found guilty of a crime that makes you deportable. You will be forcibly removed from the U.S.

A dropped or dismissed charge is not a conviction. However, arrests can have repercussions when facing U.S. immigration authorities. In most cases when applying for a change in immigration status you must prove that you are of good moral character.

Note that if you were convicted in a juvenile court this may not be used against you, but if you were indicted as an adult regardless of being under the age of eighteen, you can still be deported for the crime you committed.

The question herein is “What if you were never officially found guilty?” As stated by the U.S. law (particularly the Immigration and Nationality Act at I.N.A § 101 (a)(48)), a person can be found convicted of a crime with or without having formally reached a guilty verdict.

If there was no substantial finding of guilt but you entered a guilty plea or no contest (“nolo contendere”) or if you submitted sufficient evidence for a guilty finding to be made and the court judge decided on a sentence, court payments, restraints of freedoms against you, you could be considered as a convicted felon of the crime you may have committed and will be deported based on those findings.

This will and can have an impact on you, if the plea is withdrawn or dismissed at a later date and you did not follow through with court orders executed against you.

There are also pre-plea diversion programs (where you will not be required to enter a formal plea) and deferred prosecution or sentencing will not be counted as a conviction for immigration purposes.

A deferred adjudication program can be used against a person solely on the kind of policy administered and if there is a guilty plea.

An Expungement of Record

Not all states in the U.S. grant that you request your conviction be expunged or withdrawn from an expungement of record after a specific time frame of having achieved good moral character.

While this can work in your favor when seeking employment or submitting applications for college or in certain areas of your life, an expungement of record cannot prevent you from facing removal proceedings.

Expungement of records are considered as normal convictions by the U.S. immigration law. Failure to communicate any expunged crimes to a U.S. immigration official when applying for a green card may result in an unfavorable situation.

If you are in need of legal assistance contact The Gambacorta Law Office today for more information.