All recipients of Green Cards can stay in the United States for an unspecified amount of time as would any American Citizen. 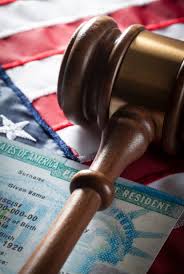 However, green card holders do not have the same privileges as U.S Citizens. That is why it is important to obtain U.S. Citizenship if the intention is to live permanently in the United States of America.

Categories in Which a Green Card and U.S Citizenship Can be Obtained

To avoid confusion let us examine closely the differences between a Green Card and U.S. Citizenship and how they can be obtained. Simply put, a green card is a change of status, to legal permanent residency; not U.S. Citizenship.

U.S Citizenship has more privileges and rights than any other U.S. Immigration status. A Green card can be obtained through different categories, a diversity visa lottery, asylum, employment, and special immigrants category.

However, there are also various ways people can obtain U.S. Citizenship; this is through birth in the United States, birth to a USC parent when in a foreign country, or if you are living in the U.S as a child and your parent is a naturalized U.S Citizen. One direct category in which individuals can apply for U.S. Citizenship is by joining the U.S.

Military, while this may seem simple, you must follow the stipulations set aside by the U.S. Immigration Law. If you desire more information about U.S Military classification and obtaining U.S. Citizenship, it is important to talk to an Immigration Attorney.

The first thing that usually happens is that an, individual will find a person that is willing to petition for them or sponsor them, (particularly a USC spouse, family member or employer), then they apply for a change of status, that is legal permanent residency and if approved the individual becomes the holder of the most coveted item, a Green Card.

Becoming the holder of a green card is step one and one step closer to becoming a U.S citizen. However, applicants must provide substantial evidence that proves their eligibility, if not they can or will be forcibly removed from the country.

It is always important for permanent residents to apply for U.S. citizenship as early as possible, but it is important that they have the essential information to support their change of status.

Having United States Citizenship Status means having the privilege to enjoy living and working in the United States. U.S. Citizens also have the freedom to vote when registered, and they can even petition for other family members from abroad and may even be eligible to sponsor one of their relatives.

The only manner in which U.S. Citizenship can be revoked is if fraud was committed to obtain such status, penalties for this are strictly enforced by the law to its fullest extent.

To avoid all the doubting that may trickle through your mind while working to obtain permanent legal residency and U.S. Citizenship, consult an expert Immigration Attorney today. Contact The Gambacorta Law Office at 847-443-9303.

Also Read : Immigration Bills and Changes to Observe in 2015