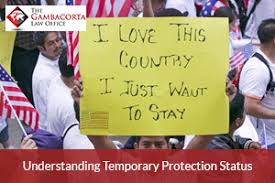 The Secretary of U.S. Department of Homeland Security will sometimes grant Temporary Protected Status (TPS) to specific foreign-born individuals who are unable to return to their homeland safely. This could be because of war, environmental conditions, or epidemics. In order to be eligible for Temporary Protection Status, individuals must have been continuously physically present in the United States.

Currently, the United States provides Temporary Protected Status to more than 400,000 individuals. The majority of those TPS holders are from El Salvador, Honduras, Haiti, and Nepal. They reside all across the United States in major cities such as Los Angeles, Washington D.C., Miami, Boston, and New York.

What Does TPS Mean?

There are many advantages to Temporary Protected Status:

Are TPS Holders Good for the American Economy?

Current data suggests that TPS holders are good for the economy. The vast majority of TPS holders (88.5%) are currently working in various sectors. TPS holders from El Salvador, Honduras, and Haiti contribute more than $4.5 billion every year in pre-tax wages to our nation’s gross domestic product. They also contributed more than $6.9 billion to Social Security and Medicare over the course of the last decade.

The Future for TPS Holders

Recently, the Trump administration declined to extend the TPS status for more than 260,000 Salvadorans. They also ended the TPS status for Sudanese, Haitians and Nicaraguans individuals. In April, the Trump administration announced the end of TPS status for Nepal as well. They stated that the conditions which once allowed the government to grant them Temporary Protection Status no longer exists. By the end of September 2018, more than 326,000 immigrants will lose their Temporary Protection Status.

A class-action lawsuit filed in February seeks to help TPS holders by forcing federal immigration officials to adopt a looser policy towards allowing them to seek green cards and work visas. Currently, some TPS holders have been able to obtain green cards in some states, while others have been denied in other states. They request that there be a more uniform interpretation of the law.

Talk to an Immigration Lawyer Today

If you need assistance with the immigrant visa process or you are a TPS holder seeking a green card or work visa, contact The Gambacorta Law Office today at 847-443-9303 for a phone consultation.