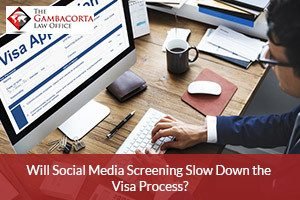 More than 10 million visas were issued in the United States in 2016 alone, according to statistics from the State Department. Now, the State Department wants to begin screening five years worth of emails and social media accounts for every single visa application they receive. They believe that collecting this data will help strengthen the vetting process and help confirm applicants’ identities. While this may seem like an overwhelmingly difficult task, the State Department is confident that it will not result in longer processing times for the majority of visa cases.

The new proposal demands that all immigrant and non-immigrant applicants submit all of the social media handles, email addresses and phone numbers that they have been connected with over the previous five years. They would also be required to disclose additional personal information about family members and jobs that they have held in the past.

In the past, such extreme vetting measures were typically reserved for individuals seeking immigration to this country that the State Department thought were “high risk”, such as those who had once lived or worked in a country with high rates of terrorism. Prior to this change, 65,000 applicants met these conditions and were put through this level of extreme vetting each year. Under this new plan, more than 15 million applicants would be put through the rigorous extreme vetting process every year when they apply for visas.

This new proposal isn’t a done deal yet. After May 29th, it will need to head to the Office of Management and Budget for approval before this new extreme vetting process can begin.

Extreme Vetting Under the Trump Administration

President Donald Trump has made it one of his administration’s goals to get tougher on immigration into the United States. Last year, President Trump issued a travel ban on immigrants coming from specific Muslim nations. He also instructed embassy officials to scrutinize a broader pool of visa applicants and include more in the extreme vetting process. The decision on who was subjected to extreme vetting, however, was left up to the security officers at each embassy.

Under the Trump Administration, the ICE wants social media platforms like Facebook to proactively turn over data that would help them determine which immigrants would be good for the country and which ones should be vetted more extremely. While speaking during a joint hearing in Washington DC, however, Facebook CEO Mark Zuckerberg said that he would not comply with ICE and proactively provide data.

Applying for a Visa

The immigrant visa process can be intimidating and complex. The majority of those seeking immigration into the United States do so for two reasons: work or family. To be eligible for an immigrant visa, you must be sponsored by a U.S. citizen relative, a permanent resident, or a prospective employer.

Your sponsor must then file a petition on your behalf with the U.S. Citizenship and Immigration Services.

Talk to an Immigration Lawyer Today

If you need assistance with the immigrant visa process, contact The Gambacorta Law Office today at 847-443-9303 for a phone consultation.