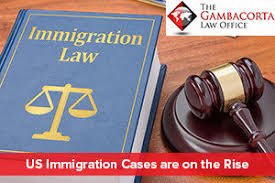 Recently the Department of Justice released stats that told a sad story.  This story was that the U.S. Immigration Court has seen more cases in the first half of 2017 than they did during the entire 2016 year.

Take for example this outrageous case.  In 2014, a Guatemalan immigrant and his son crossed to the United States through Mexico.  They entered the United States under the asylum process, even though the father had been previously deported.  The father, was picked up by police for a misdemeanor crime unrelated to his immigration case, the misdemeanor charge has been dismissed.  However, due to his father’s deportation the son, who is only 15 years old is now a ward of the DHHS and the court is trying to determine where he should live.  Since his father’s deportation he has stayed with a friend of his father and his uncle.  It will be up to the court to decide where his long term placement will be.

The aggressive arresting behavior of the ICE agents is sending more undocumented parents back to their home countries and leaving their children to fend for themselves in the foster care system.

With the increase in immigration arrests and deportation it is important that you know your options.  If you are in the United States Illegally and you have young children, find an immigration attorney and set up an appointment to discuss your options today.

Call the The Gambacorta Law Office at 847-443-9303 and we will always be ready to assist you. We have offices in Illinois, Arizona, Texas.