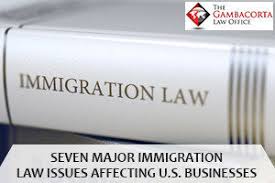 Many businesses in the United States of America are very concerned about the immigration laws, policies and the changes that are affecting the business community.  Even though the competition has become more fierce for companies both nationally and abroad they have been inclined to hire key foreign workers.  On the other hand, The Immigration and Customs Enforcement have orchestrated government raids that have ended in criminal prosecutions against U.S. employers for employing undocumented immigrants which has caught the interest of the public eye.

Regardless of the problems affecting the workforce, businesses are now focusing on the difficulties the immigration law will bring about in the future.  Specifically, with the president who is pressing hard for a major reform of the country’s immigration laws in 2017 and onwards which likely will be on the forefront of the business arena.

While there has been a higher demand for immigrant workers to enter the U.S. to work, businesses nationwide must be aware of certain immigration law issues.  If you face any conflict with the U.S. immigration law as an employer talk to your nearest immigration attorney for advice.

ISSUE #1 – The Invalid Form I-9 is Still in Effect

According to USCIS, employers can still continue using the expired Form I-9 until further notice to confirm the legal status of new foreign employees.  A stiff sanction of around $375 to $16,000 is given to business who hire undocumented immigrants to work illegally in the country.  Failure to provide a Form I-9 can end in $110 to $1,100 per violation.

ISSUE #2 – The Lawful Status of Immigrant Workers is Still Unknown

In 2016, the Supreme Court authorized the Department of Homeland Security to postpone the deportation of undocumented workers for up to 3 years.  The unknown number of immigrants who were already working in the U.S. could remain working under certain stipulations.  Unfortunately, for employers who had initially hired any illegal workers will find that they are no longer able to work in the country and this will pose a problem, for both parties.

According to U.S. Congress the limit of skilfull employees who can legally work in the U.S. with an H1-B visa has already been met.  USCIS has began H1-B petitions for 2018 fiscal year on April 1, 2017.  USCIS has accepted 20,000 applications via H-1B Master’s Exemption, however, there is a cap of 65,000 for the 2018 Fiscal Year.  Businesses who rely on immigrant workers must start filing their petitions for the following fiscal year.

According to the unbiased Fiscal Policy Institute it is estimated that the undocumented who legally obtain a work status might receive an increase of 5% to 10% in salary.  U.S. Employers must plan ahead because these immigration reforms are unpreventable.

ISSUE #5 – The Competition will Become Fierce after Immigration Reform

The bipartisan group known as the New American Economy, strongly believes that foreigners are 50% able to establish a new business as opposed to U.S. born citizens.  On the bonus those businesses can aid in reproducing more income for the U.S., regenerating infrastructure and renovating cities.  In contrast, U.S. businesses will need to better their own competitive advantages and create more win-win situations.

When a country opens up its doors allowing foreign workers whether skilled and unskilled this may lead to a higher rate of the “brain drain phenomenon” in underdeveloped nations.  This means that a country loses its highly educated and creatively skilled workers to other countries when they migrate from their home country.  This movement creates a problem because the most competitive workers leave and cleave to other nations contributing their expertise to the economy of other countries.  The country they leave then suffers from economic hardships because those who stay in their home countries lack the mastery in how to accomplish greater things for their companies.  This obliges countries to execute their own immigration limitations.  Businesses that function overseas might see opportunities diminish if the brain drain phenomenon heavily emphasizes on trading on another company’s economy.

ISSUE #7 – Too Many Undocumented Immigrants

Approximately sixty percent of illegal immigrants live in six different states such as Texas, New York, New Jersey, Illinois, Florida and California which have a large population.  This mass group makes immigration look like a territorial issue.  Businesses in these states will be raided by immigration law changes in which neither the employers nor employees will have no chance at voicing their opinions.  Those changes will benefit no one.

Whether you as a business owner or your employees are facing a hard battle with the U.S. immigration or you want to hire immigrant workers, consult with an expert immigration attorney.  The Gambacorta Law Office will advise and formulate a plan that best suits your business.  Call us today at 847-443-9303 for an office appointment at our Arizona office or in Illinois.