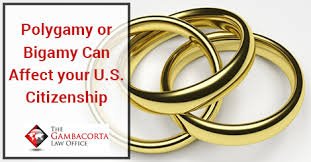 Polygamy and Bigamy, are known as crimes in the eyes of the U.S. immigration law. Any polygamist or bigamist applying for U.S. citizenship will be denied, and deported.

Many believe that polygamy and bigamy are the same. USCIS is not using the word polygamy in their Form N-400 anymore and it has been confusing applicants. The question now asked in the form is, “Have you ever been married to more than one person at the same time?”

While others have answered “No” their application has been rejected and they wonder why they have been denied. The truth is that they have been polygamists and they do not understand the way USCIS translates this.

Bigamy Within the Context of U.S. Immigration Laws

Bigamy is being married to more than one husband or wife at the same time and this is a crime. Committing bigamy in the United States is done by applying for a second or third marriage license when being currently legally married to one wife.

Consciously committing bigamy includes lies and deception. Most bigamists lie to their multiple spouses by hiding that they are married to more than one person all at the same time.

If you have been found guilty of the offense of bigamy you will be barred from obtaining your naturalization certificate. Involuntary bigamy can obstruct you from obtaining your U.S. citizenship, unless you follow certain steps to amend your predicament.

Polygamy Within the Subject of U.S. Immigration Laws

Customarily having more than one spouse at the same time is viewed as polygamy according to the USCIS Policy Manual. This means that all individuals involved are fully conscious of the legal marriages and knowingly accept this polygamist behavior either for religious or cultural motives.

USCIS will look at your sexual and family relationships if they suspect you are a polygamist even though that is not your intention. If a certain religious group or culture acknowledges the tradition of polygamy then you may be considered to be a practicing polygamist.

Consider this example: an immigrant who is a polygamist in his home country, enters the United States but before he can become a U.S. citizen he must choose one spouse as his legal wife who will be lawfully present with him in the U.S.

Years later after obtaining his U.S. citizenship he divorces and marries his former wife and for her to enter the U.S. he must petition for her.

When the visa petition is approved, the once former wife who is now married to foreigner comes to the United States and then USCIS discovers that husband is still living temporarily with the first wife.

All three spouses can be charged for the crime of polygamy because they are active participants of polygamy although their country knowingly accepts this lifestyle.

Even if the husband lives with both women at the same time, and regardless if the wives live separately or together; they can and will be penalized by the U.S. immigration laws.

Likewise if a foreigner from a country where polygamy is not legally recognized but culturally, follows through with a traditional ceremony of marriage with a person from his or her country who traditionally has other spouses, will be viewed as a polygamist by USCIS.

Though there is no lawful marriage between the couple and if he or she is in the U.S. while her husband and his other women are living outside of the U.S. they can be perceived as a polygamists.

In current day, Polygamy is accepted by the Islamic religion. Nonetheless, as an outcome of the acceptance of polygamy in the ancient biblical times, here today there are active polygamists in both the Christian and Hebrew customs.

Furthermore, several Southeast Asian and African countries have firmly established socio cultural customs of polygamy. If you are from any of these groups of people who practice polygamy, USCIS will do a thorough investigation if there are indicators that reveal your family life is polygamous.

Though countless non-citizens are from religious traditions that have engaged in polygamy, several others have believed in polygamy; simply believing in polygamy is not a crime in the United States, just so don’t practice polygamy and you should not worry.

Immigrants Whose Countries Practice Polygamy are in the Spotlight

Since the USCIS views polygamy as a crime in the U.S. and other countries view polygamy as some religious or cultural custom, USCIS inspectors are keen on focusing on immigrants whose countries accept polygamy.

When foreigners apply for their U.S. citizenship, USCIS administrators closely examine every U.S. citizenship application to ensure whether the applicant was previously engaged in polygamy or is currently involved. Every immigrant is put in the spotlight.

Read an article about Polygamous foreign marriages under U.S. law.

A strategy USCIS agents use to identify the polygamist is by finding out the birthplace of their children. The most current Form N-400, stipulates that all children’s birth places must be clearly included as well as an explanation of the relationship to the applicant be provided.

Another method that USCIS representatives use to expose polygamists is by staying aware of those requesting a name change.

Specifically if it is a female applicant asking for a change of surname from her previous relationship to her current spouse’s last name; this may indicate that the person is in an unlawful marital relationship with more than one spouse.

Take note that USCIS officials are experts in detecting polygamy, especially if you come from a nation that takes part in polygamy.

Regardless if you were previously an active polygamist or unintentionally were unlawfully connected to other women there is a high chance of getting your U.S. citizenship application denied.

It is encouraged that you are honest on your application forms; any false information could lead to your denial of a naturalization certificate and a forcible removal from the United States will follow.

Before you apply for U.S. citizenship, if you have had multiple unlawful traditional marriages that you may not even remember how many spouses may have your last name contact an expert immigration attorney to discuss your situation.

The Gambacorta Law Office is dedicated to helping you rectify your marital circumstance. Call us today for an office consultation at 847-443-9303. Our offices are in Arizona and Illinois.