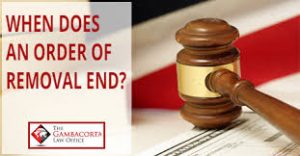 If you have not obtained any benefits from the U.S. government during your deportation or removal proceedings in the presence of an immigration judge in a U.S. immigration court then you are most likely going to be forcibly removed from the country.

Failure to attend a scheduled court hearing can end in an order of deportation by an Immigration Judge in your absence.

Although Immigrations and Customs Enforcement may be adamant about having you deported as soon as possible they should not enforce an order of removal against you until it has been finalized by an immigration judge, because such a decision is dependent on the circumstance of a case.

The 30 Day Opportunity to Appeal

ICE cannot remove you from the country before this. If you have changed address, quickly notify the Immigration Court so you can be informed of what is happening with your case.

Reserving the right to appeal even if you have no intentions of appealing gives you time to prepare to leave the U.S.

Also Read : How Do I Go About Filing For Appeal?

Executive Order of Removal in Absentia

Not appearing at your court hearing can bring serious consequences and it leaves room for an immigration judge to decide your fate in your absence and you will be deported. Reopening such a case is very difficult.

After an Order of Removal has been Finalized

When an executive order of removal has been lifted against you, ICE then has the authority to start the deportation process, which can take up to 90 days.

But in most cases the deportation process may take longer. Once you have received a notification of removal from ICE, let ICE take care of the rest of the removal process.

Once served with a Form I-166 you must report to your nearest ICE office at the specific time and date scheduled. The letter kindly requests that you turn yourself in so that you can be processed for deportation.

You must bring along passport or other travelling documents with you, you will be permitted to bring a small suitcase to carry your personal belongings.

After showing up as requested with your documents and personal possessions you will be detained until the U.S. government has finalized your travel arrangements to send you back to your home country.

Countries with a large number of deportees such as Mexico and other Central American countries, are sent home on a regular basis.

Leaving on your own accord has its advantages and risks. You can leave on your own timing and will not have to spend several days in detention and be under the submission of the Immigration and Customs Enforcement.

Immigrants have control over their travelling plans and whatever else they might want to bring home with them when they willingly leave the country. The disadvantage is that you will have to pay for your trip home.

Be sure to inform ICE if this is what you’re doing, there are many who just leave the country and do not notify ICE that they have left the country.

Ramifications of Leaving the Country Unreported

Do not ignore the Form I-166. ICE will place your file at the Fugitive Unit (FU), which searches for undocumented immigrants and arrests those who do not report for removal.

ICE officers are authorized to pick you up from your house, work, or anywhere you can be found at anytime. They can and will appear at any time and arrest you.

Regardless of when an order of removal has been made against you, do not fail to comply with the immigration laws. You can face harsh penalties for not presenting yourself.

With the assistance of an immigration attorney, you will be better informed especially if you are not familiar with the U.S. immigration laws. The Gambacorta Law Office can help you. Feel free to call today for an office appointment at 847-443-9303.