In most recent news by the Associated Press, the competition between future presidential candidates became more heated as they each revealed their plans for Immigration Reform. 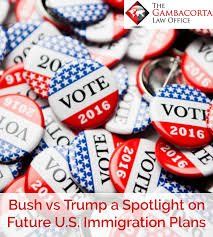 Republican presidential candidate Jeb Bush discredited Donald Trump’s immigration proposal as illogical and high-priced, all of which Bush stated in Spanish during his visit to the Mexican border.

Donald Trump, one of the country’s most dominant prospective presidential candidates, has suggested erecting a gigantic border fence and removing the approximated 11 million immigrants who are unlawfully residing in the United States of America before allowing the “good-natured ones” and “multitalented” ones back in.

Jeb Bush, Florida’s former governor commented to reporters that Trump must read his book, “Immigration Wars,” if he wants to really understand how to handle working with unlawful immigration.

Earlier, he coordinated a private meeting with federal, local and state administrators in the city of McAllen, Texas, that outlines the Rio Grande across from Reynosa, Mexico.

While Jeb Bush expressed his opinions that Trump’s plan are not realistic he continued to argue that working with the intricacies of America’s fragmented immigration system demands a much more tactical game plan. Bush reiterated that if Trump is interested in a comprehensive method, he encouraged Trump to read his book.

In July of this year, Trump, took his 2016 Republican Campaign to the Mexican Border and emphasized what he viewed as a fractured border security system.

During his appearance on Fox and Friends earlier this past Monday, Trump directed comments at Jeb Bush and applauded Jeb’s efforts on going to the border; Bush will soon realize that going to the border is not a selfless act of love.

Such comments were fueled by Bush’s comment that immigrants enter the United States of America because they are compelled by love for their families who only desire to give their loved ones better opportunities at life. Trump remarked that being down by the border is quite rugged and severe; that is definitely not love.

Jeb Bush highlighted that Trump’s immigration plan will likely cost the U.S. billions of dollars, civil liberties will be dishonored and therefore will cause conflict with Mexico, America’s third-largest trading associate.

This rebuttal from Bush only added more fuel to the fire. Trump fired back during an interview with Fox News, “The O’Reilly Factor”, he defended his view on civil liberties and stressed the recent illegal immigrant-related crime waves.

Bush identified that border security extends beyond the border with Mexico and noted that approximately 40 percent of unlawful immigrants in the United States have entered with valid visa and overstayed their time.

The federal government must push to refine how it keeps track of those visiting foreigners legally entering and exiting the U.S. he commented.

He also stated that those undocumented immigrants entering the U.S-Mexico borders are not only Mexicans but are also Salvadorans, Hondurans, and Guatemalans.

While Bush used the term, “Anchor Babies” to illustrate children born in the United States to illegals, many were insulted by such expression.

Bush supported his allegations and said that he referred to those people who may have committed fraud, who continue seeking to have their children born in America to secure themselves U.S. citizenship.

He said a more firm set of immigration policies would rectify the loophole and also firmly opposed any action taken towards the refusal of U.S. citizenship to those born in the United States.

Bush also defended himself and said it would be ridiculous to think that he was ever rude toward Latino immigrants given that of his family’s Hispanic patrimony. Bush expressed great pride being married to a Mexican-American woman of which they share Hispanic children.

If you have any relative or family member that is unlawfully living in the United States and needs legal representation, The Gambacorta Law Office will gladly help you. Our services are available in Arizona and Illinois. Give us a call today at 847-443-9303.