Every immigrant group that has entered the United States of America without inspection has had their fair share of ups and downs with the U.S. immigration system. Many undocumented people feel voiceless and confined to certain limitations. 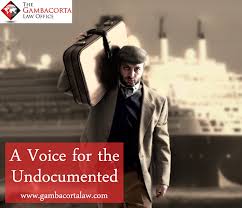 Their greatest fear is voicing their needs, because they run the risk of being caught and facing deportation. Suffering in silence and living in fear is not good for any human being, every person deserves a second chance at life and better opportunities.

The Journey of a Brave Man

At the end of a long day, after managing his parents, Deli, in Brooklyn, New York, Jong-Min You, spends countless hours studying law texts in hopes of fulfilling his lifelong dream; to live legally in America. So far his dream has been deferred by the US government.

You has had the privilege of appearing on the cover of Time Magazine, and has been hosted by presidential prospects, taken part in speaking engagements at an Ivy League University at only 35 years of 35. Despite all of his personal success, he has not yet been able to get his legal documents, even after living in the United States for almost his entire life.

You, was over the age to be eligible for the first version of this program, nevertheless, he would qualify for the extended version that eliminated the age gap and introduced certain stipulations for parents of unlawful immigrants; if it was not for the court decision that paused President Obama’s Executive order.

Differences Between Qualifying Latinos and Asians

If You stands a chance at petitioning for immigration relief, he aspires that it would happen alongside more Asian immigrants that participated in the previous first 3 years since the inception of the DACA program.

According to research released this month, by a Migration Policy Institute (MPI), since the establishment of the DACA program in August 2012 up to March 2015, just 21 percent of Asians that applied, qualified for the program, in contrast to the 77 percent of Latinos.

Though the figures of undocumented Latin Americans are much greater, in 2012, 892,000 Latin Americans qualified for President Obama’s relief program, and only 87,000 Asian immigrants were eligible.

You has expressed gratitude towards the Latino Community as they have strongly supported immigration reform. But, he wants his Asian community to express their needs so they are heard and that those suffering in silence may stop.

After applying for a hospital training program, while in attendance at one of New York City’s elite high schools, You, learned that he was undocumented. His mother informed him that he did not have a green card, and enrolling was pointless.

You commented that the cultural standard for his people was to not expose your dirty laundry in public, so nobody needed to know about my current status, parents even encouraged their children not to tell.

You expressed that his parents disapproved of him becoming one of the, “Asian Tokens” for immigration stories, but regardless, was inspired to join the movement to prove that it is fine being open regarding one’s undocumented status.

According to, You, living in silence was an obstruction. He observed that Latino children and families would simply be at ease hanging out at rallies, more power to them, while the same could not be said of Asian families.

You firmly believes that for this same reason Asian families should become engaged in the undocumented movement. You stated that his parents overstayed their family’s visa that they obtained as students when traveling to the U.S. from South Korea in 1981.

Though they pay taxes and own their houses, they have not been able to return to their home country, for fear of not being able to reenter the country if they left.

Applying for a DACA would be futile as the expansion is only temporary; You and his family would not be eligible for U.S. citizenship, a prerequisite for him to fulfill his dream of becoming a federal judge.

Despite all the limitations, Jong-Min You longs to see his Asian Community strive towards joining the Immigration Reform movement. According to the MPI Analysis, besides the cultural pressures, studies show that Asians are unwilling to discuss their immigration status for fear of getting deported.

According to Tiffany Panillo, a legal supporter for Los Angeles Asian American Advancing Justice, told MPI that reaching out to people is essential for encouraging them to apply for relief, however, the numbers of Asians applying for relief are low.

Credit Given, Where Credit is Due

Analysts and You, give credit to the vigorous Latino – U.S. News sources like Telemundo and Univision for highlighting the immigration issues the immigrant communities face on a daily basis.

While Social Media is a mechanism that has propelled and inspired Latin Americans to be open and fight the good fight, You, hopes that one day his Asian community will join in solidarity with the Latin Americans for immigration reform.

If you have been suffering in silence and you need an advocate on your behalf, please feel free to contact The Gambacorta Law Office, we will defend you and your family.

Don’t let your undocumented status limit your life opportunities. You can call us at 847-443-9303 for an appointment. Our offices are located in Arizona and Illinois.