Every year, thousands of American Citizens marry foreigners and then their foreign spouses apply for their permanent resident status in the United States. The way to obtain a green card for your foreign spouse depends on where you were married. 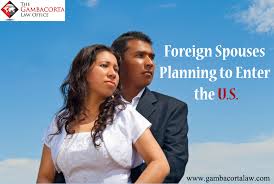 Either inside or outside of the United States. Every situation is different and the U.S immigration law will require that both the American and the foreign spouse complies with the rules and regulations.

The K nonimmigrant visa, also known as a Hybrid Visa, permits a fiancée or spouse of an American citizen to enter the United States of America and adjust their status to permanent residence. If you plan to marry outside or within the U.S. it is recommended you apply for a K-1 or K-3 nonimmigrant visa category.

K-1 visas are accessible to foreigners who intend on marrying U.S. citizens and want to live permanently in the United States.

It is stipulated by the United States immigration law that U.S. citizen meet their foreign spouse at least two years before applying for a K-1 Visa. Both the American and foreign spouse must prove that they qualify to get married in the U.S. Evidence must be also provided of any previous marriages. Proof must be shown, that you plan to marry your fiancée immediately after entry in the U.S.

The foreign fiancee will be allowed a 90-day timeframe after receiving the K-1 single entry visa; the marriage must take place during that approved time period. However, the foreign fiancee is not eligible to petition for an extended amount of time while holding a K-1 Visa. If the 90 days pass by and no marriage takes place, then the foreign spouse becomes subject to deportation or must leave immediately.

The foreign spouse is not allowed to adjust status or apply for any nonimmigrant visa type. Such change of status can only be done under a conditional permanent resident status immediately after marrying U.S. citizen.

Procedure For Filing a K-1 Visa

First, apply for the K-1 fiancee visa petition from the USCIS. Once the petition is approved by the USCIS, they will send it over to the American Consulate in the home country of the foreign national applying for the visa.

The petition is effective for 4 months from the date it was activated by the USCIS and may be reactivated by the consular administrator. The American Consular will inform the foreign fiance when the approval notice is received and will provide the applicant with appropriate forms and directions for the K-1 Visa application.

Advantages to Holding a K-1 Visa

Getting Married Outside the US with a K-3 Visa.

Recipients of a K-3 visa grants spouses of American citizens entry into the United States under a nonimmigrant visa classification, even when waiting for an immigrant visa.

The approved length of time for a K-3 visa is 2 years and during that time foreign spouse can live in the U.S. and wait for authorization of the Form I-130. Nevertheless, the immigrant spouse can apply for an adjustment of status (legal permanent residency), instead of waiting outside of the U.S. The immigrant spouse may be able to apply for an extension of at least 120 days starting at the expiration of the K-3 visa.

The foreign spouse is not allowed to apply for any other nonimmigrant visa type. After an immigrant petition has been approved by USCIS, your spouse can then apply for an adjustment of status.

Procedure for Filing a K-3 Visa

The American citizen must promptly file I-130 for Alien Relative with USCIS on behalf of a foreign spouse. A Form I-797 Notice of Action will be sent out specifying that the Form I-130 was received.

Then the K-3 petition must be filed and accompanied by a duplicate Form I-797 and a copy of a Form I-129F and then sent to USCIS. After these documents have been received they are examined and sent to the respective U.S. Consulate so the foreign spouse can apply for the K-3 visa.

In the eyes of the United States Immigration Laws, foreign spouses of U.S. citizens are viewed as immediate relatives and are privileged from being under scrutiny by law. However, deciding to get married inside or outside of the U.S. demands that people carefully identify the options available to them.

With all the unexpected issues that can arise with the U.S. immigration system it is best to consult a professional immigration attorney when applying for a K-1 or K-3 visa. Contact The Gambacorta Law Office today at 847-443-9303. We are happy to help you with all your immigration needs.