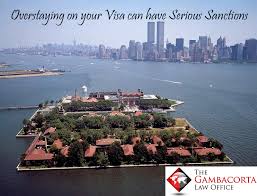 Prior to the 1996 Reform that was orchestrated to protect people overstaying their time the U.S., there was no harsh penalties, even though many faced deportation.

Those who overstayed a visa were still able to obtain immigration welfare like, receiving an adjustment of status after paying a civil penalty fee, applying for Asylum, cancellation of deportation, departure and reentering the country was optional.

Categories of Most Commonly Overstayed Visas

Countless people have overstayed their visa. The primary categories of visas that have been overstayed include:

Penalties for Overstaying a U.S. Visa

Waivers for Non-immigrants and Immigrants 3 or 10-year Ban

2. Immigrants: The regulation does not grant a particular waiver that has a 3 or 10-year ban for immigrants who are spouses of permanent residents and American citizens.

Prevent overstaying a visa and its sanctions by:

Failure to comply with the rules and regulations of U.S. immigration may end in stiff penalties. Jeopardizing your privilege to travel to and from the United States of America.

Speak with an Experienced Immigration Attorney

It is always recommended that you do not overstay a U.S. Visa, but if you have found yourself facing such a situation, you will need an Immigration Attorney to handle your case. Please contact the Gambacorta Law Office at 847-443-9303. Our team will be glad to meet your legal needs.