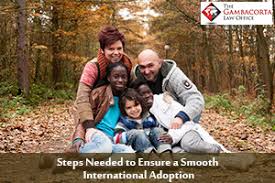 Thousands of children in foreign countries are adopted each year by United States citizens. The process to make this happen can be daunting to the couples who are investigating this method of making a family.

The safety of the child is of primary concern to the countries involved, but there are also laws in place to protect both the adopting parents and the birth parents. Once an international or intercountry adoption is decided upon, there are steps that need to be taken – some of which can be set in motion even before the child is chosen.

The first step in the process should be for the prospective parents to familiarize themselves with the laws governing international adoption. There are three sets of laws that must be considered:

When the parent investigates these laws, they will encounter a multitude of potential challenges. There may be some requirement of the foreign country that might somehow preclude the adoption from taking place. That is why investigating all the laws is necessary, and why retaining a lawyer experienced with this process is a wise first step.

Many adoptions of this type are overseen by two entities: The Hague convention and The United States Citizenship and Immigration Services Department. The Hague Adoption Convention has been agreed to by 75 countries, and choosing to go with this group of countries may make for a smoother adoption process.

The adoptee must be under 16 years of age when the adopting petition form is filed out and must reside in a country that is part of the Hague convention. The child must be determined by the country of origin to be eligible for adoption and must have all the necessary consents from that country. There is a list of qualifications that the prospective parent must also fulfill in the Hague adoption process.

It is still possible to adopt outside the Hague’s auspices. This is called a non-Hague or orphan adoption. In this case, the child must either have lost both parents or have one parent that feels they can no longer provide for their child’s well-being, along with other qualifications.

The prospective parent should choose an adoption agency that is authorized to conduct services for a Hague adoption if they choose this route. Even with an authorized agency, it is still important to enlist the help a lawyer for this process. An experienced lawyer will be able to represent you in any matter before the USCIS department concerning the adoption; the agency chosen cannot.

Once the agency is chosen, they will arrange for a home study. This process will be used to determine the suitability of the adopting person or persons. After interviews and background checks, a home study document will be provided and needs to be submitted to the USCIS as part of the list of requirements and forms that need to be completed before an adoption is possible.

The long journey isn’t over even once the adoption becomes official. An adopted child will not immediately gain U.S. citizenship upon adoption – a visa is issued first and citizenship comes later. The transition from visa holder to U.S. citizen is yet another reason for hiring an experienced immigration attorney.

A successful adoption will undoubtedly be a dream come true for both parent(s) and child, but the process can pose a serious challenge for those who don’t have intimate knowledge of the laws and processes.  The Gambacorta Law Firm has successfully represented many adoptive parents in the field of international adoption and can be there for others with the same dream. Contact us today to find out how we can help you in your quest to build a family through adoption.