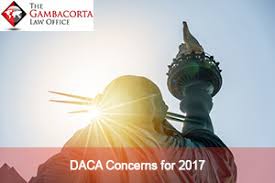 The United States and Citizenship Immigration Services (USCIS) publicly announced that USCIS will still be accepting DACA application forms regardless of the potential for the DACA program coming to an end.

Since the establishment of the DACA program, each applicant has to weigh out the advantages and disadvantages before they apply.  Submitting personal information to the U.S. immigration authorities can be risky.  However, becoming the recipient of a DACA provides you with several benefits that were emphasized in a recently published report called, New Study of DACA Beneficiaries Shows Positive Economic and Educational Outcomes.  More than 750,000 immigrants have applied and had a positive outcome in obtaining higher paying jobs, applying for their driver licenses and eventually enjoyed other U.S government benefits.

If you do not have DACA and you are planning on applying for the very first time, it will benefit you to visit a local immigration attorney or an accredited representative from the Board of Immigration Appeals. Immigrant communities are fearful of the many unknowns regarding the DACA Program under the leadership of President Donald Trump.  First timers applying for a DACA are encouraged to not file their DACA application until they have gotten legal advice from a certified representative or immigration attorney.

Processing a DACA may take up to three or more months. This is concerning because in 3 months time the DACA program may no longer exist, no one is aware whether USCIS will no longer be accepting DACA submissions or what will USCIS do with the unfinished cases.  There is a high possibility that if you submit a DACA application it will not receive an approval and you may run the risk of losing your DACA application fee.

In contrary if the DACA program under President Trump is not is shut down before your DACA application is approved you may benefit and there is also the likelihood that:

Applicants can renew their DACA before its expiration date even if it will expire later in 2017.  When applying use the recently updated Form I-765 for this year.  Starting on February 21, 2017, United States Citizenship Immigration Services will not be accepting applications that are completed on an earlier version of the Form I-765.  Submitting an older version of the Form I-765 may only prolong the processing of your DACA submission.

Do Not Travel While your DACA Application is Processing

During this time of U.S. presidential transition it is advised to not travel abroad as it is still uncertain as to what the Trump Administration will decide in reference to the DACA Program.  However, if you have been granted Advance Parole and you choose to travel; do not prolong your trip.  Upon returning make sure that the lawyer representing you is available at the time of your return entry into the U.S. so as to advise the immigration officer if you encounter any issues.

Presently, the principle of USCIS is that all information about DACA applicants or family members are not shared with U.S. Immigration and Customs Enforcement (ICE) unless requested due to a national security problems or other criminal records.  This policy derives from a 2011 USCIS Memo which affirms that USCIS will allude to cases that pose a serious threat to the public.  If you are concerned that your personal information has the chance of being transferred from one immigration department to another, discuss with your attorney before applying for DACA benefits.

Consult with an Immigration Attorney

To avoid stress this year, talk with an immigration attorney before you begin the process of applying for a DACA.  With the advice of an attorney, you can determine whether or not you should go ahead and apply for the DACA program.

Contact the The Gambacorta Law Office at 847-443-9303 today for an appointment at any of our offices located in Illinois, Arizona and Texas.