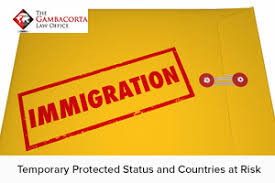 Since 1990 the United States of America has provided many foreign countries with Temporary Protected Status, a program that Congress established to provide humanitarian relief to immigrants from conditions or uncontrollable circumstances that affected their countries; this way those countries affected by disasters would not be burdened with the return of many nationals to their home countries.  Certain nationals who were already living in the United States of America were provided with TPS by USCIS.  Foreign nationals were allowed to work and were protected from getting deported by Immigration and Customs Enforcement.  However, the manner in which TPS has been used has become an issue of debate, mainly because of the concern whether TPS is a short term or a long term program.

Below are temporary circumstances in which a Country was granted TPS:

Within the TPS appointed time, individuals who are given TPS or are initially found eligible for TPS:

Countries At Risk of Having Their Temporary Protected Status Removed

Under the Trump Administration, the Department of Homeland Security has announced that TPS for immigrants is terminated.  The deadline for certain nationals to leave the U.S. has already been issued. Temporary Protected Status was provided to countries such as:

In 2018, the agency will decide whether to lengthen TPS for five other nations:

According to the most recent data shared by the United States Citizenship and Immigration Services, approximately 435,000 foreigners from 10 countries have TPS and will likely be affected by the termination of Temporary Protected Status.  This means that the U.S. will start deporting immigrants the moment they lose their legal immigration status.  The foreign community living with TPS are uncertain of their future and are therefore looking for a positive way in which the U.S. government can make amends.

It is clear that confiscating employment authorization documents and lawful status from a large number of people who have established long-standing social ties and work relationships with employers in the United States of America will have a major impact on immigrant community as well as the U.S. economy.  The repercussions of ending TPS needs to be reexamined by the current administration.

With the plight of the TPS, seek the counsel of an immigration lawyer Chicago to understand your options.  Call The Gambacorta Law Office today at 847-443-9303 for a consultation at the Arizona office.  Our other locations are in Illinois, Texas and Vietnam.