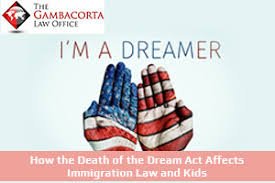 President Trump’s recent decision to end the Deferred Action for Childhood Arrivals (DACA) within six months may have some drastic consequences for immigration law and kids.

Trump’s decision means that 800,000 young people who entered the U.S. illegally and qualified under DACA could now face deportation as early as March 2018.

The DACA is an amnesty program President Obama created in 2012 that provides five years of legal protection for children (known as Dreamers) who entered the U.S. unlawfully to remain in the country without fear of deportation. It also grants them the right to work.

The President did offer some hope hours after announcing his decision, tweeting that Congress should try to legalize DACA to provide permanent protection to the Dreamers vulnerable to deportation.

Immigration Law and Kids and Protection For Those Under the DACA

What’s clear is that the recent decisions about the DACA will have consequences for Dreamers who now enjoy its protections.

For example, if the DACA is phased out by March 2018, the resident status of the Dreamers under this act will revert to what it was prior to the 2012 implementation of DACA.

That means that Dreamers will be unable to legally work, and in some states they will also be unable to obtain driver’s licenses.

However, that does not necessarily mean that all 800,000 Dreamers will be forced to leave the U.S.

In fact, even if Congress does not legalize DACA or come up with another workable immigration plan that protects Dreamers, it is highly unlikely that states will begin mass deportations.

That would only occur if Immigration and Customs Enforcement (ICE) thought that a Dreamer presented a threat, and that it was important to ‘federal interest’ to deport that Dreamer.

Until Congress or the President take further action, it is difficult to predict what legal challenges Dreamers could face to protect their status, but the notion that mass deportations will occur in March 2018 is highly unlikely even in the worst-case scenario.

If you’re an immigrant, these can be scary times as you try to understand the implications of some of the decisions being made by the government. And there’s no question that the phasing out of the tenets of the DACA will have wide-reaching consequences. If you or a loved one is affected by the recent government decision regarding DACA, please contact the Gambacorta Law Office for help. We have spent decades handling a number of difficult immigration cases, and we have the resources to help you understand your options. Call us today at 847-443-9303 for a consultation.

Knowing My Rights At the U.S. Border (Part 1)