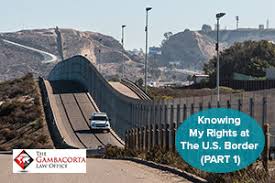 Since the new transition of U.S. Presidency and the executive travel ban that was signed by President Donald Trump, many Legal Permanent Residents, and U.S. citizens are in a panic and afraid that they may be searched by immigration custom officers when entering the U.S. border.  People everywhere are asking questions like: Can custom agents arrest you at border checkpoints or airports? Can the officers search through your electronic gadgets if you have any in your possession?  Will you be penalized if you refuse undergoing a thorough check of your phone and computers?

Here are some of the answers to your questions as stated by three U.S. immigration and privacy law experts: Nathan Freed Wessler, a staff attorney from the ACLU, Danielle Rizzo and Leslie Holman of the American Immigration Lawyers Association.

Can I be detained or inspected at the U.S. Border?

Yes.  It does not matter, whether you are a Legal Permanent Resident or a U.S. citizen or in the U.S. with a temporary visa.  Customs and Border Protection agents are authorized to stop any foreigner entering the U.S.  This is randomly done in order to obtain more information about you so a decision can be made whether you are to be allowed into the country.  Immigration expert Holman stated that even if you enter the United States under any temporary visa, CBP officers will ultimately decide your admissibility into the U.S.

Are My Legal Rights The Same in Other Places?

No.  According to the Fourth Amendment designed to protect individuals from being interrogated and arrested without raising any suspicions about a crime that was committed.  This approach may not be applicable at the border, as commented by Rizzo.

Am I Entitled to an Immigration Attorney?

Getting the assistance of an immigration lawyer may be dependent on whether you are a U.S. citizen.  The ACLU advises that all U.S. citizens are allowed to have an attorney available when going through an interrogation.

Non-citizens of the United States of America are not granted the opportunity to have a lawyer present detained for further questioning unless if the immigration customs officer discovers that the traveling immigrant has a criminal record.

Once the asking of questions goes beyond the basics; then every foreigner deserves the right to have an attorney present.

Are CBP Agents Authorized to Confiscate My U.S. Green Card?

No, CBP officer can demand that you sign a form that will have you disown your U.S. Permanent Resident Status.  According to Rizzo, in most cases (except if you have a criminal record and you are under the deportation process) U.S. Green Card holders have the right to an attorney and a court hearing before an immigration judge.  This way you can return to the U.S. to wait for your hearing.

If you are concerned about traveling to the U.S. it is better to consult with an immigration attorney.  Contact The Gambacorta Law Office at 847-443-9303 for a consultation at any of our locations in Arizona, Illinois and Texas.