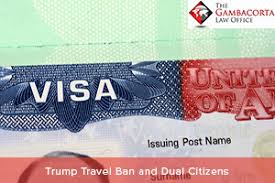 The executive order banning entrance into the country for foreign nationals from seven countries has made more than headlines. The State Department has tried to clarify the people who are actually being banned, and it seems that any naturalized citizen of the U.S. will not be affected.

There was a concern about the ban on anyone who has dual citizenship. An example cited on Quartz.com at the time explained that a person with dual citizenship in the U.K. and Iran would not be allowed into the U.S. for a period of ninety days – even if traveling under their British passport. That would give the State Department time to vet them before allowing them to visit.

The wording of the provision barring those with dual citizenship was alarming to those in our country who have dual citizenship in the U.S. and one of the banned countries. The State Department has since clarified that if the person was traveling under their U.S. passport, there would be no ban to their entry.

The Gray Area of Dual Citizenship

A person who becomes a naturalized citizen in this country but wants to maintain citizenship in their native country does have the right to do so. When a citizen of the U.S. accepts citizenship in another country due to a marriage or taking employment in that country, the State Department will not expatriate that person unless they commit certain acts – such as, unless the person enters military service in a country at war with the U.S. or they take an oath renouncing U.S. citizenship, or they take other actions that reveal intent to expatriate themselves from U.S. citizenship.

The person who wants to retain their citizenship in their homeland but also become a naturalized citizen in the U.S. may have reservations about taking the loyalty oath. The oath includes the statement “I hereby declare that I absolutely and entirely renounce and abjure all allegiance and fidelity to any foreign prince, potentate, state or sovereignty, of whom or which I have heretofore been a subject or citizen.” That would seem to rule out the idea of retaining the ancestral country’s citizenship, but rulings from the Supreme Court have allowed people to maintain dual citizenship and the State Department seems to only mildly discourage the practice.

In light of the travel ban and other laws that may pass in the future, dual citizenship may have some new problem areas no one can anticipate right now. At present the stance of the State Department, though seemingly murky, is actually pretty clear. You can pledge allegiance to two countries and maintain dual citizenship.

Know Where You Stand

Even with defined laws and regulations, knowing exactly where you stand when it comes to your immigration status can be very confusing. The immigration law team at Gambacorta Law Office has extensive experience in these matters and we can work with you to ensure the best possible resolution to your specific legal situation. Whether applying for dual citizenship, or being interviewed by the INS or Homeland Security, we can help you protect your rights and help you properly answer any questions the government may have about your current status.