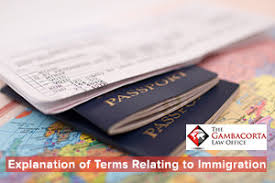 Immigration laws can be very complex, even for those who deal with them every day. And with new legislation and the advent of the executive order involving travel to and from the United States, things are getting even more complicated. Those who have come to the United States seeking all that the country has to offer may not really know what their exact status is according to our laws. Here are some terms from the National Conference of State Legislatures that everyone should know.

Immigrant – In actual legal terms, an immigrant is someone who is here legally. Another term for immigrant may be a legal alien. This term doesn’t include temporary visitors or students.

Qualified Alien – This term describes lawful permanent residents, refugees, Cuban, Haitian, and asylees (people granted asylum). A qualified alien may have been paroled into the United States for a period lasting a year, they could be aliens granted conditional entry into the U.S., or granted withholding of deportation from the U.S., or a battered spouse with their children. These aliens are eligible for federal public funds if they had attained qualified status before August 22, 1996.

Not Qualified Alien – This designation simply can mean a person not included in the term defined above. The not qualified alien is ineligible for any public funds due to the welfare reform act of 1996. Not qualified aliens are those who are undocumented immigrants and non-immigrants.

Lawful Permanent Resident (LPR) – The lawfully permanent resident has been given the right to permanently reside in the U.S. In essence they are green card holders. They are granted this right due to family relations or a particular job skill. People seeking asylum and refugees must move into this category after residing here for a year, and after five years they may apply for naturalization.

Naturalization – This process is how a person can attain permanent citizenship of the U.S. They must be at least 18 years old and have lived in the U.S. for five years, or three years if they are married to a U.S. citizen. There is a testing procedure to see if they have a familiarization with English, with American government, and with U.S. history.

These terms have been getting thrown around for a long time by many with no clear understanding, which may have immigrants in our country confused as to what their status is under the law, both federal and state. The uproar over the travel ban certainly led to confusion for nearly everyone involved.  During this time many travelers were incorrectly being referred to as immigrants, when most were temporary visitors.

Those who have arrived in our country and those who reside here face many challenges, including knowing what their current legal status is and what steps need to be taken to ensure they are not in violation of any laws. Even if they aren’t here illegally, difficulty with the English language and the law may lead to them failing to represent themselves correctly when confronted by an INS or Homeland Security official.

The attorneys at the Gambacorta Law Team have ample experience with immigration law.  Our attorneys have the expertise to deal with any government entity (state, local, or federal) when it comes to the rights of those not originally from the U.S. If you are unsure of your legal status or if you have a problem involving proving your legal rights to stay in this country, contact our offices in your state to find out how we can help.