Simply proving you have a strong moral character, does not guarantee acceptance of your Immigration Application, in fact, in some cases, it could even damage your immigration application. 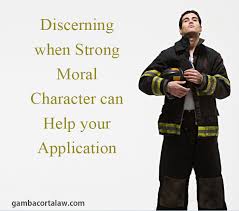 Many people ponder over what to do to prove that they are good citizens and that they should be approved by the Immigration Court when fighting deportation, filing for an Adjustment of Status or whichever application they are filing.

There is nothing wrong with collecting substantial evidence of achievements and of good moral character because in most cases it is very important.

However, what people may not know is that if they need such evidence of their good moral character to support their application, it might not be enough evidence to make your case.

An individual who has no serious criminal history and generally meets his responsibilities as a law-abiding citizen and is good-natured is considered to have a good moral character. As stated by the USCIS Policy Manual, “Good moral character matches the caliber of average citizens of a society in which an applicant resides.”

Before the eyes of the USCIS certain Felonies are viewed as crimes of moral turpitude. A conviction for any of the crimes listed as moral turpitude can deem an individual as not having a good moral character.

However, if your criminal history is several years behind you and you are able to prove that you have amended your life, you might still qualify for immigration benefits like cancellation of removal proceedings. Just remember that USCIS has the authority to decide your case.

If certain past crimes you committed bring doubt that makes you feel unworthy and/or ineligible for immigration benefits, you should hire an immigration attorney to help clarify your situation and help you.

Preserve a Good Moral Character as a Legal Permanent Resident

Showing good moral character at the time of applying for naturalization in the United States of America is extremely important. You should also preserve this good character for a five year period while living in the U.S, if this occurs then there should be no concern about receiving naturalization unless the naturalization official discovers that you have committed some crimes or you did not meet certain stipulations by the immigration law.

Furthermore, while traveling abroad if an immigration official uncovers you have a criminal record you may not be allowed to reenter the United States of America.

It is highly recommended that you retain an immigration lawyer if you have a criminal record while under permanent resident status, and if applying for U.S. Citizenship or even when traveling to another country.

Good Character is Pivotal for Some USCIS Immigration Cases

Unlawfully residing in the U.S. may not disqualify a foreigner for certain visas, this is all dependent on the current living situation. Example, if the applicant is a victim of a crime, he or she may qualify for a U Visa or they may also be eligible for a green card under the provisions of the Violence Against Women Act (VAWA).

An applicant may also qualify for a Waiver of Inadmissibility while living in the U.S. illegally. In those circumstances above the person applying must prove good moral character.

If you have a unique immigration situation and wonder if you will need to prove, you are of good moral character, seek an Immigration Attorney today! Contact The Gambacorta Law Office and we will help you out.