Beneficiaries of R-1 Visas, presently employed as ministers or involved in a religious profession may have a more uncomplicated path to attaining lawful permanent resident status. All applicants must meet certain requirements in order to obtain a LPR status. 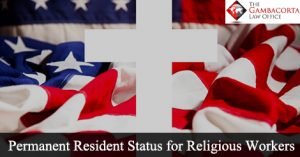 The most basic way for a religious worker to obtain his green card is to first apply for the R-1 Visa; if approved, then he/she will need to work for 2 years and continue the process with same employer or another interested employer. Holding an R-1 Visa might help speed up the green card process.

Changing Status From an R-1 Visa to a U.S. Green Card

Step 1: A U.S. Employer files I-360 Visa Petition on Behalf of Foreign National.

If the immigrant already has the stipulated 2 years working experience as a religious worker, the U.S. employer can then move forward and fill-out Form I-360 with USCIS on behalf of foreigner.

The reason behind the extended processing time is that the USCIS is strict about making visitations for first-timers applying under the religious worker classification. USCIS simply makes visits to confirm that the association and future employment is genuine. To make matters even more complex, the USCIS sends agents to visit the employer’s main and other connecting organizations, and does a thorough analysis of related documentations and orchestrates interviews with other employees and church ministers. These extended visits are only applicable to first-time applicants.

Step 2. Immigrant Worker Adjusts Status at a U.S. Consulate of in the U.S.

After an employer’s I-360 Visa Petition is approved by USCIS the foreign national he/she has two available options. He can either fill out an I-485 Application to Adjust Status with USCIS or seek an immigration visa, at a U.S. Consulate in his home country.

Applying for Adjustment of Status in the United States of America

All recipients, present or future employees of I-360 visa petitions legally living in the U.S. may be eligible to file Form I-485, Application to Adjust Status, and then submit to USCIS. Other family members such as a spouse and underaged children that are solely dependent on primary applicant may submit I-485 Applications as Derivative applicants. Processing time for this particular application may take 6 months or even longer.

Applying at a U.S. Consulate for an Immigrant Visa

Future employee living in foreign countries while the U.S. employer is seeking an I-360 visa petition on behalf of immigrant worker will go through a slightly different process after an I-360 petition is approved.

Primary applicants must begin by assembling and submitting their paperwork and making several payments to the National Visa Center (NVC). After the NVC finalizes the process the immigrant worker and his family members such as a spouse and underaged children, if approved, will be granted the opportunity to interview at the U.S. Consulate abroad and will then obtain their immigrant visas which are comparable to a green card.

The U.S. Consulate in their home country provides a short-term confirmation status (I-551) inside the passport. The authentic green card(s) will be mailed to the U.S. address of the beneficiary, within a few weeks or months of entering the U.S.

It is quite evident that regardless of any U.S. visa category, all applicants must provide solid evidence and reasons for the pursuit of a green card. If you do not want to go through the entire process alone, hire an immigration attorney.

The Gambacorta Law Office can provide the assistance you need, especially knowing that U.S. immigration laws are firm. Do not hesitate to call us at 847-443-9303. Make an office appointment to any of our office locations in Arizona and Illinois.