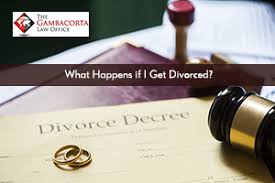 If you obtained your U.S. green card (Legal Permanent Resident Status) or some type of immigration status while married to a United States citizen, you may wonder: What would happen if I get a divorce prior to becoming the beneficiary of a lawful status?

As is with every case each divorce is different.  If you got divorced because you were suffering emotional or physical abuse while in the marriage then you might have a chance at proving to the immigration officers that you deserve another opportunity to stay in the U.S.  However, if you intentionally marry an American citizen simply to evade the U.S. immigration laws then you should be concerned.  This is known as a marriage sham.  The United States Citizenship and Immigration Services maintains that a major number of foreigners commit marriage shams in which immigrants purposefully marry a U.S. citizen simply to obtain legal immigration status.

There are many stipulations and conditions by which foreigners must abide by and only if their marriage is sincere they are eligible and able to receive U.S. immigration benefits.  Evidently for those immigrants who through fraudulent marriages attempt to obtain their legal permanent status are not able to keep their marriage relationship real for long enough during the immigration process and wind up with marital problems which result in divorce.

Even couples in genuine marriages have problems and get divorced, yet USCIS is able to recognize this fact.  A divorce may be disastrous while an immigration process is pending but it may not be as devastating.  Each divorce case entangled in an immigration situation will be handled accordingly by the USCIS immigration officer handling the case, however you must do your best in convincing USCIS that your marriage was real and that you deserve a chance at living in the U.S.

A Few Steps in The Immigration Procedure

Consider these steps and how they can impact your rights as an individual:

If you or your U.S. citizen spouse currently have a pending immigration case with USCIS and are going through a divorce, call an immigration attorney to assist you.  An immigration lawyer can help you analyze your situation and look for possible options on how to move forward with your case.

Contact The Gambacorta Law office today at 847-443-9303 for a consultation at any of our office locations in Illinois, Arizona and Texas.