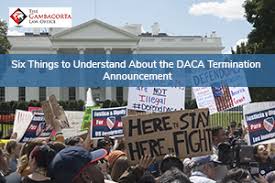 The Deferred Action for Childhood Arrivals (DACA) provides relief to a specific category of foreigners to temporarily live and work in the United States.  In 2012, The U.S. Department of Homeland Security publicly announced that it would not deport a particular age group of young people who were illegally in the country.  Five years later, the immigrant community received the heartbreaking news from the Trump administration that the DACA program would be terminated.

Thousands upon thousands of families are against the idea of seeing their loved ones leave hoping for a resolution that would keep them united.  Since the public declaration was made the immigrants protected by DACA have been stricken with fear and uncertainty as to whether they will be able to achieve their American dream or even have a bright future in the U.S.  The entire nation has gone into an uproar against the pending decision to end DACA.

While the United States has been in a protest along with immigrant communities both in the country and abroad, here are six things we need to understand about the DACA program:

If you are still unsure about your future call your nearest immigration attorney.  A lawyer can help you understand how the DACA program works and what steps to take in obtaining legal status in the U.S.

Call The Gambacorta Law Office at 847-443-9303 for an appointment today at any of the current locations in Arizona, Illinois and Texas.