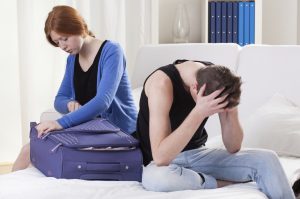 If an immigrant finds himself or herself getting a divorce prior to obtaining U.S Citizenship even after it was proven that the marriage was legitimate and genuine before the eyes of the law.

Fear not, there is a way to amend the situation and prevent yourself from getting deported or forcibly removed from the United States.

However, this process is not easy, it is a challenge and an immigration attorney should be sought out as soon as possible, so you do not face deportation.

It may be presumed that an immigrant divorcee may be deported if he or she does not have a permanent resident status but is not always the case.

The divorcing foreigner stands a better chance at staying in the United States of America if he or she hires an immigration attorney to help with the case.

During the process the immigrant must have evidence that the marriage was initiated in good faith and not for the motive of gaining an immigration status. He or she must also prove that they lived together at the same residence, shared expenses, had a child and ownership of property.

If the foreigner can attest that he or she will encounter severe hardships or that his or her life is in grave danger if he returns to his or her home country and that he or she was a battered victim, brutally assaulted by their American spouse, he/she may stand a higher chance of remaining in the country.

What to Be Aware Of

Ultimately, no matter how great of an obstacle divorce may be for an immigrant’s citizenship status, an immigration attorney Phoenix can help with finding a positive solution.

The Gambacorta Law Office offers prompt legal assistance. You can contact via our website or call us at 847-443-9303.