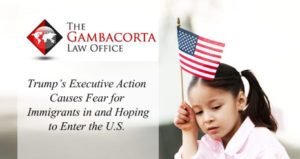 When Trump was elected President of the United States in November of 2016, many immigrants in the U.S. became nervous. Thousands more had their hopes all but dashed at the prospect of being able to come into the country.

The Executive Action that is “in the works,” according to the Trump administration, is being created in an effort to “protect the American people from terrorist attacks.” The administration also goes further and states that it is designed to ensure the people entering the country don’t have hostile attitudes toward the country or its founding principles.

However, many people are still unclear about exactly what the Executive Action is going to do and how it is going to affect current and future immigrants.

A rundown of what is expected to come from this document includes:

Once the Executive Action is in place, it is likely there will be a full block on all Syrian refugees from entering the U.S. for an indefinite period of time until the President lifts the band. During this period, safe zones are to be created in Syria to house individuals who are awaiting resettlement.

The action will also block all other refugees for a period of at least 120 days. During this period, the U.S. Refugee Admissions Program for 2017 will be reviewed and new vetting procedures will be enacted.

The action is also designed to reduce the total number of refugees that are eventually admitted in 2017 to just 50,000. This is lower than the number proposed by the Obama Administration.

While there is likely going to be a ban on all refugees for a certain period of time, those who are non-Muslim may receive priority status. This is especially true for those who are religious minorities who are suffering some type of persecution.

It is expected that for a period of at least 30 days, the ability to come into the U.S. and issuance of visas for individuals from Yemen, Syria, Sudan, Somalia, Libya, Iraq and Iran will be suspended. During this period, the government will take time to review the screening process used for admitting entry to these individuals.

In an effort to better track foreign nationals in the U.S. a biometric entry-exit tracking system is expected to be developed. This can help prevent individuals from overstaying their allotted amount of time.

For many immigrants, these new stipulations and requirements are extremely scary. However, for those who want to immigrate into the U.S. legally, it is still possible. The best course of action is to hire a quality immigration attorney. They can evaluate the situation and determine what needs to be done to expedite the process.