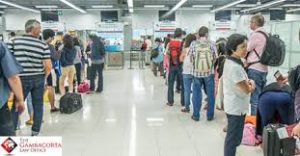 Thousands of foreigners asked, “How long do I need to wait to re-enter the United States of America after I have been deported?” The length of time is dependent on the primary reason why an immigrant was forcibly removed from the U.S.

For an order of removal or deportation the waiting period may be five, ten, twenty years or in certain cases an immigrant may not be allowed to reenter which means they have received a permanent ban from the country.

Time Frame to Re-enter the U.S. After Deportation

In other instances, few deportees are allowed to enter the U.S. on a visa right before their stipulated waiting time frame ends. While this may be puzzling it is on your best interest to consult with an immigration attorney for legal advice on how this might be possible.

This simply boils down to understanding your current immigration situation and opportunities that may arise along with the kind of waiver one must apply for.

Find Out If an Order of Removal Was Placed Against You

Part of learning how long you must wait before you return to the U.S. is dependent on you taking the initiative to finding out if an immigration judge placed an order of removal against you.

Always be sure to ask whether you were told to attend a court hearing at a designated immigration court in your local area. An immigration judge has the authority to decide on an order of removal in your absence.

Rarely does an immigration judge provide a voluntary departure, which lets the immigrant leave the U.S. at anytime before a given set date. It is better to freely leave the country so as to avoid being issued an order of deportation or removal.

Willingly departing the U.S. does not exempt you from being inadmissible into the U.S. for several years. Inadmissibility is based upon the amount of days of illegal presence you accumulated.

A source you can check to see if an immigration judge provided an order of removal, is the Immigration Court Hotline at 1-800-898-7180, this call is FREE as long as you are in the United States; make sure to follow the instructions of the recorded voice message. You can also call an expert immigration attorney to help you.

Your Situation Dictates the Length of Waiting Time

Whether you have received a deportation order or an order of removal this will dictate the length of your wait time before you are able to enter the U.S. again.

For some it will be five, ten, or even twenty years until they can enter the United States of America. Unfortunately, others are banned permanently from entering the U.S.

The five year ban applies if you were detained as you were entering the U.S and it was discovered that you were inadmissible or whether you were forcibly removed or deported out of the U.S. after going through removal proceedings.

An immigration judge’s final decision of an order of removal in your absence will have a negative impact on your behalf. You may not be able to enter the U.S. ten years later.

A twenty year ban may take effect if a foreigner who was once deported, reenters the U.S. before his ten year ban was expired. Simply put, an Immigration judge will add another ten years to your previous penalty.

Convictions of aggravated crimes, such as unlawfully entering the U.S. a second time after being deported or accumulating unlawful presence for over a year may earn you a permanent ban from the United States of America.

For Legal Help! Consult with a Knowledgeable Immigration Attorney

If a previous deportation or order of removal is hindering you from entering the U.S again and you are currently residing in your home country and you need to enter the U.S for some emergency reason, do not hesitate to consult with an immigration attorney.

An immigration lawyer can help weigh out your options. The Gambacorta Law Office is ready to assist you. Please feel free to give us a call at 847-443-9303 for an office appointment.

Our office locations are in Phoenix Arizona, Chicago Illinois, and Honolulu.