Mesa AZ, Skokie IL and Honolulu HI Offices serving all of US 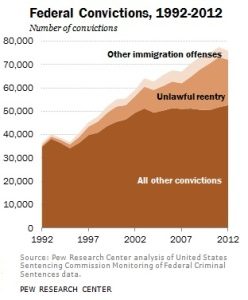 ICE deals primarily on the apprehension and deportation of individuals who have committed minor crimes or those who violated the immigration laws.

Although it’s been claimed by U.S. Immigration and Customs Enforcement that immigration- enforcement prioritizes the apprehension of terrorists, dangerous criminals, and gang members, however, if we’re to base it on the number of deported two million people since President Obama took office, it seems like the administration failed on what their so-called priority list.

According to the Pew Research center which analyzes data from the U.S Sentencing Commission, a great number of deportees have committed minor, non- violent crimes, or do not have any criminal histories tagged on their names. In fact, most of them only have committed immigration violations.

– Level 1: convicted of an aggravated felony or felonies.

– Level 2: convicted of a felony, or three or more misdemeanors.

– Level 3: convicted of no more than two misdemeanors.

Now, where do those certain individuals without criminal convictions fall? In Priority 1, of course.

To make things more detailed to some, a felony is a crime which is punishable for 1- 2 years in prison. Examples of felonies are: burglary, murder, robbery, and arson. On the other hand, a misdemeanor is something lighter, which is punishable only for five days and would not reach a year in prison.

Misdemeanor includes: driving under the influence or drunk driving, traffic violations, or peace destruction. While the aggravated felony is purposely intended for immigration only.

Oh yes, many have reacted as to why illegal immigrants fall under this term when aggravated felony sounds fearful and threatening to people. But this actually has about thirty kinds of offenses, and even failure to file an income tax return or a not being able to show up in court, are one of them.

Having said that, obviously many of you would ask how ICE evaluates and categorizes the great number of deported immigrants.

In 2013, a lot have reacted as to how did ICE deport 7 out of ten individuals without giving them the chance to plead their cases in front of a judge? Many would wonder why were there no sign of respecting the individuals’ legal rights? Some would ask where, now, is the justice system in the United States?

This misallocation of enforcement resources cause protesters to speak out because those deported individuals who were not a threat to anyone did not just lose their jobs, but most of all, they were torn apart from their families and loved ones. Detainment and deportation destroy families.

But in fairness to the administration, some states are actually cooperating on preventing deportation of immigrants with low- level offenses. In New York City, for instance, NYPD are now prevented from turning over offenders with clean records to U.S. Immigration and Customs Enforcement.

The police department officers are now barred from handing over immigrants with minor offenses to federal immigration authorities. Moreover, illegal immigrants who are arrested on petty crimes in NYC no longer have to worry about being deported. In addition, Obama administration has been supportive of legislative reform. In fact, just recently, President Obama announced a humane deportation.

No matter what citizenship one holds, if one is not a threat to our country’s safety and security, one deserves a big ounce of respect from everyone. Again, let us be sensitive to every human’s sufferings. Most of us have friends or families who share this dilemma.

For as long as one would follow the set of rules and protocols, there will always be a way to turn one’s status from illegal to legal. The nightmares of being deported is not easy, for sure. We are here for you.

The Gambacorta Law Office would want to hear your stories or your cases. Retain a good deportation immigration lawyer who would help and guide you step by step. Call Atty. Timothy Gambacorta at 847-443-9303. Or bookmark our direct site at http://www.gambacortalaw.com